THE New X96S  device is almost as tiny as a pack of chewing gum. X96 is a popular manufacturer of entry-level Android and Windows 10 thin clients, has just unveiled a new smart stick based on Android that plugs straight into a TV or monitor. 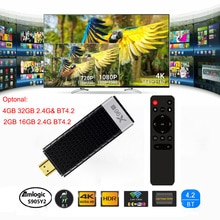 HDMI sticks are a bit like Marmite but they serve a very useful purpose. The X96s is one of the smallest Android computers you will find on the market and is powerful enough for most office tasks especially as it supports Miracast. That tiny form factor means that you won’t have a lot of room to maneuver,  especially as it is barely bigger than a pack of chewing gum at 98 x 33 x 13mm.

Despite this, the X96S still packs in a quad-core CPU that runs Android 8.1, 4GB of RAM, 32GB storage, a microSD card reader and a full-size USB port. Along with Bluetooth and 802.11ac, it also comes with a number of useful accessories like remote control, an IR receiver and an HDMI cable.

Connect with:
Facebook Google
Don't have an account?
sign up
Back to
log in
Connect with:
Facebook Google
Back to
log in
Choose A Format
Personality quiz
Series of questions that intends to reveal something about the personality
Trivia quiz
Series of questions with right and wrong answers that intends to check knowledge
Poll
Voting to make decisions or determine opinions
Story
Formatted Text with Embeds and Visuals
List
The Classic Internet Listicles
Countdown
The Classic Internet Countdowns
Open List
Submit your own item and vote up for the best submission
Ranked List
Upvote or downvote to decide the best list item
Meme
Upload your own images to make custom memes
Video
Youtube, Vimeo or Vine Embeds
Audio
Soundcloud or Mixcloud Embeds
Image
Photo or GIF
Gif
GIF format